The cultural differences between nations are never more pronounced that when in transit. The British, being a nation of enthusiastic queuers, are left apoplectic with rage when confronted with a country full of people who do not understand this basic concept. I am told that visitors to Britain are often intolerant or confused by some of our national pastimes such as cricket and binge drinking. The differences I see are greatly exaggerated when coming to Asia, in fact there are times when it feels like a different planet which is always an interesting experience. We haven’t been to South Korea for a few years and it is a place with which I am unfamiliar, however, armed with an almost illegible tube map and a few hours before the rehearsal I descend into the Seoul subway system. Underground systems are essentially the same in every country I have visited, they all have the same kind of charging system, day tickets and kneecapping entrance gates. Seoul is no different to the Tokyo subway in that regard and London too, although all the escalators seem to work and it is very, very clean indeed. And there were no engineering works. It is completely different to the London Underground.

As I get on the train, I notice how quiet it is and everybody who is standing up is facing the window. I decide to do the same to blend in although being the only westerner in my carriage I don’t do very well. The funny thing is that nobody bats an eyelid when I walk on, it’s just like in London, nobody makes eye contact at all looking either at smart phones, newspapers or the floor. As I pick my own piece of floor to stare at I begin to feel at home. That is until a man pushing a large blue shopping trolley appears shouting at the top of his voice. He parks his trolley in the gangway and continues shouting what sounds like a sales pitch. A few passengers look up and then look down again, although I can’t tell what he is saying, he repeats it over and over again and it appears to rhyme. It is a rhyme about gloves which have special properties. “Gosh Gareth your Korean must be good to understand that”, I hear you cry. Dear reader, I deduced all of this from the little mime he did with his rhyme. I won’t bore you with the details but they were special thin gloves with an exotic coating which made it possible to use a touch-screen without taking your gloves off. You can imagine the complexity of his miming. But not his rhyming. Anyway, just like in London, when he had finished his highly entertaining sales pitch, he walked up and down the coach thrusting gloves in people’s faces. Nobody bought. Nobody moved. He took his trolley and went off into the next carriage. I couldn’t help thinking that the experience was very similar to rush hour on the Northern Line.

As I came up from below ground, any similarities with London disappeared as I arrived at Namdaemun Market. At first glance it was a bit like Camden market before the developers developed it, but as soon as I found myself deep inside the narrow streets full of indecipherable t-shirt slogans and strange fruits there was no doubt I was back in Korea. It was a feast for the eyes as much as anything and apart from the Costabucks across the street, everything was completely alien to me. I passed a woman sat in the middle of the street with an upturned box upon which she had placed several bowls of small snacks. As I looked closer she smiled and gestured at the treats. There were various nuts, some almonds, some dried berries, and what looked to me like the main segments of wasps which had been fried. Maybe they were, I’m not entirely sure, but I decided against them for now as I still have a jet-lagged stomach and we do have to work this evening. As I turned to walk on through the crowds, all of a sudden they parted in front of me. In my slightly groggy state, having only just arrived, it took me a while to notice why they were moving until I was confronted with a motorbike carrying about 5 or 6 boxes on the back.

It was driving at quite a rate towards me and obviously wasn’t going to move, so I did! I decided to walk along the pavement at the side until a beep behind me alerted me to the moped who was racing along the same pavement to avoid the crowds of pedestrians. But, nobody seemed to mind as the crowds of people wandered around looking at the garments and electronics as they narrowly avoided death as the cars and bikes and lorries picked their way down the streets. It’s the kind of concept local authorities spend a fortune on in Europe and then call it mixed use footfall areas or something and paint the road different colours and remove the kerb. They just get on with it here in Korea and it works just fine.

As I turn the corner my head is engulfed in a cloud of steam. There is a woman turning huge dumplings in gigantic silver colander with boiling water underneath. The smell of the steam is sweet and comforting and makes me feel a little sleepy, but there is nowhere to sit down and eat here, and I really need to sit down, so I go and find a bowl of noodles around the corner and watch the world go by for a while. My body tells me that it is 3.30 am. The warm noodles confirm this and I wander back to the hotel.

We had the first concert last night in Seoul. Tchaik Romeo, Prokofiev Piano Concerto and Shos 5. Having only arrived the day before, everyone’s ears and eyes were on full alert. It is very easy when you are tired, to be counting the 20 bars rest in the slow movement and suddenly wake up as you hear the harp playing your cue and realise that you are still counting but have reached 25. I come in at bar 26. I raised my flute as quickly as I could without looking like I was panicking (which I was) and tried not to knock my teeth out. Denis Matsuev had earlier given a magnificent performance of Prokofiev where I feared for the life of the piano, such was the power of his playing. By the time we finished the Shostakovich it appeared to have stopped quivering in the corner. The audience loved the concert and so did the man on the stage door. As we left, he held up his iPhone (other makes are available) and had a scrolling word app which said “Bravo!” 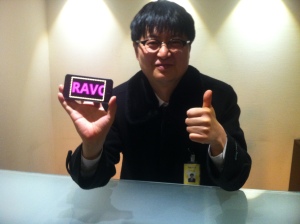 By the time you read this, we will have finished the second concert in Korea and will be preparing to fly to Beijing. We are hoping to pick up some Olympic tips from them as I’m sure you must have heard by now, we will be recording the music for the ceremonies in London later this summer. I’ll let you know how we got on.

The London Symphony Orchestra is one of the world's top orchestras. Our home is at the Barbican Centre in the City of London where we play over 80 concerts every year, but we also spend quite a bit of time out on the road, touring all over the world. Recently we have toured to Germany, France, Russia, New York, Japan, Holland, Hungary, Austria, Belgium, Italy, Switzerland and Lithuania; and coming up this year are China, Taiwan, Malaysia, Japan, Hong Kong, Spain, Portugal, Florida, Romania and a return visit to New York, where we are resident at the Lincoln Center.
View all posts by LSO →
This entry was posted in Gareth Davies, South Korea & China February & March 2012 and tagged arts, classical music, concert, denis matsuev, flute, Gareth Davies, Gergiev, korea, london symphony orchestra, LSO, Seoul, seoul subway system. Bookmark the permalink.

2 Responses to I’m a Seoul Man…