Preparations had begun months ago, not the least of which was the commissioning of an interesting new work by rising star composer, Christian Mason. The Gamelan room at LSO St Luke’s is not a kind acoustic but Christian seemed pleased with our final run through of his Isolarian II. Our rehearsal room was strewn with the clutter of sheet music, mutes, flugel horns and valve oil. Everything had to be checked and double checked – there would be no wonderful LSO admin personnel to worry about missing items for us. It didn’t help that my new arrangement of a suite from Bach’s mesmerizing Goldberg Variations already ran into three final versions. The programme has been planned with more than half an eye on an upcoming concert in London at the historic Goldsmith’s Hall, as part of the city’s festival and with the LSO’s busy schedule, rehearsal time for extra curricular activities has to be carefully husbanded.

Taking a full symphony orchestra half way around the world is never easy but it is perhaps surprising to learn that winging five brass players to Japan is proportionally just as difficult. Ordinarily most of the LSO’s precious cargo of equipment is handled out-of-sight and out-of-mind by our dedicated stage staff and cargo handlers in specialised containers. For the LSO’s brass quintet it’s ‘make do.’ Airport baggage handling is not conducive to even sturdy brass instruments and they must travel in the plane’s cabin: any damage to deeply personal equipment could seriously imperil the success of the whole enterprise. 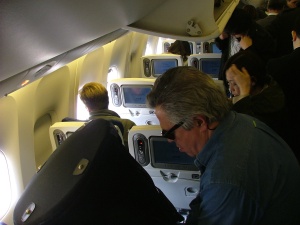 Accepting that the Tuba will always need a seat of its own is one thing, but the airline insisted that horn and trombone must share another seat. Subsequently ground staff at Heathrow’s Terminal 3 ruled that this was unacceptable: would they charge separately for Tim Jones’ remarkably compact horn case? In the event, much to the confusion of the cabin staff, both trombone and horn snuggled comfortably in overhead lockers, as would be the case for all four flights. On arrival in Tokyo Narita for our connection to Hiroshima, we were informed that a smaller plane had been substituted for the flight and the Tuba would not be welcomed thereon. Thank goodness that our delightful and devastatingly efficient agent from Kajimoto Music – Asami Sate, who had just joined us – was able to smooth things over and organised for us to stay together with a bus to another airport an hour and a half away.

Brass players are totally dependent in the fickleness of their lips and ease of performance doesn’t mix well with sleep deprivation, pressurisation and dehydration associated with intercontinental travel. As the first warm-up sounds emanated from the five LSOBQ dressing rooms at Hiroshima’s 2000 seat Bunka Koryu Kaikkan concert hall, caution and apprehension gave way to slapstick as various impressions of elementary, naive playing styles relaxed the tension. 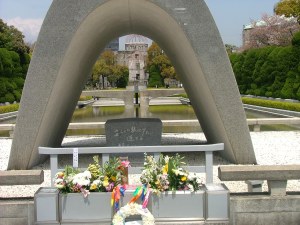 The remarkable modern bustling city of Hiroshima, its many rivers boarded by trees bursting forth their spring blossom, shows little sign of the devastation there visited 67 years ago by an event that changed the world forever. The memorial peace park is dedicated not only to the huge sacrifice this city made at the hands of a terrifying new technology but to the dream and encouragement of lasting peace and understanding.

The LSOBQ was hugely gratified by the near capacity crowd that welcomed us onto the large stage. As we launched into Jim Maynard’s Fanfare for Five the generous acoustics were a welcome contrast to our London rehearsal venue. Jet lag is not all about tiredness, and in the midst of a concentrated musical programme it can leap up and anesthetise the brain momentarily with alarming effect. No major harm was done however and the audience listened with rapt attention to a widely varied programme including the first performance of Isolarion II and Patrick Harrild’s (phonetically written by Asami) Japanese introductions.

Back in Tokyo there were performances at the British Embassy, an Elementary school and interviews with photo calls for various brass and band magazines. At the Embassy we gave a private concert (no need for Partick’s pheonetic Japanese here), renewed acquaintances and made new ones at a reception with many great friends and admirers of the LSO, who are looking forward enormously to the whole Orchestra’s visit with Bernard Haitink next year.

At the Ochiai Dalichi school we were impressed by the array of shining brass instruments laid out in anticipation of the school band’s performance for us. After a quick rehearsal we gave 200 10-12 year olds a short programme which included a ‘Fantasia – Harry Potter and Friends’ and some quick insights into our instruments. But we felt there was danger of selling ice to eskimos when their marvellous 26-piece brass band struck up with the shoe tapping Galaxy 999 without a shred of music in sight. It was the beautiful sweet sound of all two hundred voices that brought a tear to they eye as they sung their school song. Multi-talented Kathryn McDowell demonstrated her photographic skills of the event.

For our concert in the beautiful acoustics of Hamarikyu Asahi Hall, Phil Cobb (trumpet) and myself were delighted to make the reacquaintance of several members if the JSB who had visited the Royal Albert Hall last June, when they received a five-minute ovation before playing a note, as their capacity audience spontaneously rose to show their heartfelt support for the people of Japan in their deep trial and sorrow.

As we fly back to the UK on Saturday we shall leave with a sense of stronger bonds and a lasting friendships between the LSO and Japan, emphasizing the universality of music and the human spirit.

The London Symphony Orchestra is one of the world's top orchestras. Our home is at the Barbican Centre in the City of London where we play over 80 concerts every year, but we also spend quite a bit of time out on the road, touring all over the world. Recently we have toured to Germany, France, Russia, New York, Japan, Holland, Hungary, Austria, Belgium, Italy, Switzerland and Lithuania; and coming up this year are China, Taiwan, Malaysia, Japan, Hong Kong, Spain, Portugal, Florida, Romania and a return visit to New York, where we are resident at the Lincoln Center.
View all posts by LSO →
This entry was posted in Brass Quintet Japan April 2012, Dudley Bright. Bookmark the permalink.