Brussels. The centre of European bureaucracy and, if you read the right newspapers, the enemy of our proud British traditions. Leaving the Euro debate alone for the moment, Brussels has been accused at various points in the last decade of trying to force UHT milk on us, dilute the purity of our pork pies and most controversially of all, trying to standardise the great British sausage into a straight, highly measured meat product not unlike those suspicious looking foreign sausages. Being a man of the world, I couldn’t care less whether my sausages are straight or bent, they all taste the same anyway. But this city has been a byword for homogenisation.

Brussels has been given a very bad press in my opinion. For a place which supposedly wants everything to be the same, it’s a glorious melting pot of styles, regions and traditions. The architecture is stunning, particularly around the Grand Place, many of the highly decorative buildings having been constructed in the 1600s with narrow twisting alleys spurring off at odd angles, packed from floor to ceiling with iced baskets of seafood. Amongst the many bistros serving mussels are wood fired ovens releasing aromatic clouds which linger in the air. Then around the next corner, Greek, Italian, Chinese and Japanese restaurants all cry for the attention of your palette before the most glorious smell on earth cancels out all else and draws you towards the small, artisan, chocolate makers. 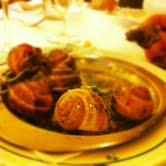 This should be banned under an EU law as the smell is so intense, so sensuous, that leaving the shop without having parted with huge amounts of money is impossible. Surely it must be illegal? Not in Brussels. Leaving the shop many Euro lighter, an even sweeter smell draws me down an alleyway which wouldn’t be out of place in JK Rowling’s imagination. There is an excitable throng of identically dressed kids, eyes on stalks, watching hot, sticky sweet waffles being produced and then being topped with strawberries and cream completely out of proportion with the size of the base. They are then given a hopelessly small plastic stick with which to eat it. Five minutes later and there are huge numbers of dirty faces and fingers being wiped, just the smiles remaining.

At the concert last night, I have never seen so many people in the theatre. With a packed stage, choir and audience, people appeared to be standing anywhere they could to watch the concert, in the aisles, behind the rows of seats – it was incredible and no doubt the health and safety people would have had a field day- but again, nobody seemed to mind. The temperature increased as we played the Szymanowski 3rd Symphony. If you don’t know it (I didn’t) it is the most glorious sound. When he was writing the piece, the influence of Ravel is obvious with some chordal progressions sounding like they were offcuts from Daphnis and Chloé but then the more central European tradition is lurking there too. When Steve Davislim declaims his vocal line from up high in the balcony, the rhythm of the speech, which is Polish, instantly changes the style of the music and Janácek springs to mind. There is one very strange flute solo which emerges from a dense orchestral and choral texture which quite clearly shows Syzmanowksi’s interest in Arabic music – there is a very high quota of accidentals and double sharps and flats in that solo!

The overall effect is very exotic and yet despite the may different influences, it sounds quite unique and coherent rather than a mix up. Eötvös lets the music ebb and flow between bars and when the climax at the end finally arrives, the sound of the orchestra, chorus and soloist at full tilt is overwhelming and intoxicating. In the musical box of chocolates that he produces, each delicately produced mouthful can be bitten into not knowing what will be found one the surface is broken. Our third performance of this piece will be next week in the Barbican and I’m still finding jewels in the texture which I hadn’t noticed before, in fact each different hall seems to highlight different aspects of the piece more than other repertoire.

Before today’s concert I wandered around the centre again and found another crowd of schoolchildren singing a song to an appreciative audience. As I got closer I realised they were gathered around that iconic symbol of Brussels, the Manneken Pis. The song they were singing would have amused my kids, I’m guessing its a well know song as people were joining in, but the chorus was … how can I put this … onomatopoeic. I had to laugh at the thought of this wonderful city supposedly the purveyor of red tape that has as its symbol a small statue of a small child, urinating into a fountain. As if that wasn’t enough, he is dressed up in different outfits to celebrate different festivals and celebrations. This week? It’s Gay Pride week. I have no idea who chose the outfit. Brussels. Brilliant!

The London Symphony Orchestra is one of the world's top orchestras. Our home is at the Barbican Centre in the City of London where we play over 80 concerts every year, but we also spend quite a bit of time out on the road, touring all over the world. Recently we have toured to Germany, France, Russia, New York, Japan, Holland, Hungary, Austria, Belgium, Italy, Switzerland and Lithuania; and coming up this year are China, Taiwan, Malaysia, Japan, Hong Kong, Spain, Portugal, Florida, Romania and a return visit to New York, where we are resident at the Lincoln Center.
View all posts by LSO →
This entry was posted in Gareth Davies, Paris & Brussels May 2012 and tagged Belgium, Brussels, classical music, concert, flute, Gareth Davies, instruments, london symphony orchestra, LSO, music, musicians, orchestra, symphony, szymanowski, tour. Bookmark the permalink.

3 Responses to Life is like a box of chocolates