If you’ve ever had the misfortune to spend prolonged periods of your life in the glittering half life of the back stage area of any concert hall around the world then you will be familiar with the scene I am about to describe. The Green Room, which isn’t, is meant to be the relaxation area for performers to lounge around in and relax. When you wear tails for a living, seeing a bunch of men in full evening dress lounging around on sofas – reading, chatting, but more usually these days staring at a smartphone – is normal, however to the layman it must look like a very strange scene indeed. Fortunately, most green rooms don’t have any comfortable chairs in and so we are usually either standing or perched on government issue plastic chairs. Backstage at Aix-en-Provence, I am happy to say, does however have sofas, and also the added bonus of a chocolate machine – the unofficial engine room behind many a great performance. The riders in the Tour de France may use performance enhancing drugs (allegedly), but to mount the peaks of a Valery show, I find nothing works better than lounging on a sofa in the green room with a strong coffee and a Twix. Or one of the other brands which are available.

The one feature that all green rooms have is a television and yesterday was no exception. Despite repeated requests at all venues, the TV usually has only one channel; it shows the stage from the back of the hall, and tonight it is showing LSOTV. It helps you relax as, although we’d rather be watching the football or something, you can’t hear the show from backstage and it is useful to see that the concert is going on and you haven’t missed anything. I should point out that I am not in the first half. I was downstairs getting changed in the bowels of the theatre to play Firebird in the second half, Nikolaj Znaider was playing the Tchaikovsky concerto and as I approached the green room I could hear applause. Not that I was late, but I was surprised that he had already finished and so as I walked into the green room I was greeted by Super Mario and Carina staring intently at the television set in the corner.

“Has he finished already?”
“No. Just the first movement.”

The first movement is quite long, and applause often follows it, which in turn is followed by hissing and shushing by people who love music more than you and want to show you by trying to make you feel like an idiot. Anyway, a few more people started looking at the monitor so I had a look. LSO – check. Valery – check. Znaider – oh. Mario assumed the tension of a sprinter.

With that he flew out to find out what was going on and the whole green room was suddenly gripped by the monitor which showed the orchestra waiting. 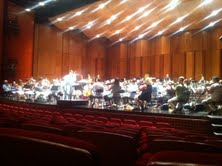 Nikolaj rehearsing without Valery. He was listening in the stalls for balance!

You could by now hear the audience talking and a few latecomers appeared in the stalls feeling fortunate at their late entrance. But there was no soloist. It turns out that he had broken a string and despite being offered a spare by Lennie decided to go back to his dressing room and get one of his own special soloist strings. He was gone for about 10 minutes in the end. The orchestra sat stock still and the only thing I could see moving was Valery’s foot tapping rhythmically on the podium. Bearing in mind nothing was happening, we all were glued to the screen watching…well…nothing happening, all eyes on to the door at the side, willing it to open. We watched; nothing happened. Waiting for a Danish violinist to reappear on the TV, it was just like watching The Killing but without the jumpers. Strangely slow moving and compelling.

And then all of a sudden the door opened and he flew back on to huge applause and continued with the second movement. After that, the monitor lost its appeal and we resumed lounging around eating chocolate. Mario and Carina walked back in to their Blackberries looking completely unflustered.

“What happened?” I asked
“Broke a string.”

I guess his dressing room was even further away than mine was.

After the muted excitement of the performance, we returned to play the Firebird. Quite often Valery whirls onto the stage and in one movement bows, turns and gives the downbeat often leaving the first chord clouded in audience murmur. Tonight he came on, bowed and then turned and just stood. For ages. The silence which then enveloped the stage and hall was claustrophobic. Pins dropped, mice stopped stirring and finally the toothpick quivered gently and the basses started their opening figure. You know when Valery demands silence at the start that he means business and the orchestra subtly shifted its collective weight to the edges of its seats. What followed was a demonstration in control from the conductor and my extraordinary colleagues in the orchestra. Quiet chords were on the safe side of inaudible, pauses were stretched to impossible lengths and speeds at times left virtuosic musicians flying. Valery had that look in his eye, he seems to dare you to look at him and when you do a twitch of the eyebrow or flick of the finger coaxes a different turn of phrase to any previously considered. I fell into his gaze at the end of cadenza and he pushed me into a bigger crescendo than normal and then at a moment of slowing where he normally leaves me to make the decisions, he dictated each note, slowing to a halt and getting quieter until my last held note was barely audible. At this point he flashed a smile and didn’t move leaving me suspended somewhere in the top octave not daring to move, as to do so would see me fall off the ledge. Then just as the note was about to crack, relief as his downbeat brings the rest of the band in. The Firebird once again came alive on the stage without the need for dancer and yet again our conductor has found another way of telling the story. Critics will often complain that this piece is a series of exciting episodic scenes joined together with scene shifting music for want of a better definition. Not with Valery, long phrases of barely distinguishable pitches from the two contra bassoons sound dark and menacing before he stretches out the glissandi to form waves of sound, punctuated by tight muted brass chords at their close. There are times when the sounds produced don’t sound like an orchestra at all. I mean that it a good way.

The heat on stage at the end of Firebird is intense and as we all pour out into the late night warmth of Aix, my friends and I endeavour to put the flames out in a small, sultry courtyard bar until early into the morning. It’s too hot to sleep.

The London Symphony Orchestra is one of the world's top orchestras. Our home is at the Barbican Centre in the City of London where we play over 80 concerts every year, but we also spend quite a bit of time out on the road, touring all over the world. Recently we have toured to Germany, France, Russia, New York, Japan, Holland, Hungary, Austria, Belgium, Italy, Switzerland and Lithuania; and coming up this year are China, Taiwan, Malaysia, Japan, Hong Kong, Spain, Portugal, Florida, Romania and a return visit to New York, where we are resident at the Lincoln Center.
View all posts by LSO →
This entry was posted in Aix-en-Provence Festival July 2012, Gareth Davies and tagged aix, classical music, Gareth Davies, instruments, london symphony orchestra, LSO, nikolaj znaider, stravinsky, symphony, tour, Valery Gergiev. Bookmark the permalink.