Where you’ve been reading the blog from since February!

Writing this last blog from the final tour before the summer holiday, it seems appropriate that rather than sitting in yet another hotel room writing to you, I am speeding on a train through the Surrey Hills. Despite the glorious weather and beautiful countryside of southern France, as the train slows through Shalford Junction I am almost home; and today is a special day, my daughter’s 8th birthday, a birthday that hasn’t been sacrificed for the schedule … and it’s not even raining. 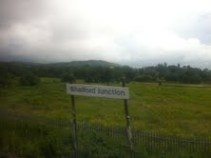 I’m sure I will be less misty eyed about it, however, when the ridiculously named ‘sleepover’ party is in full swing later on tonight.

Last night was the final concert in Aix en Provence and what a concert it was. Renée Fleming was singing, so no string malfunctions were on the horizon, and we were also playing Cinderella for the first time (you can hear the whole ballet at the Proms later this summer). After the rehearsal in the morning, I had a quick sandwich and then returned to the Academy which was taking place upstairs in the hall. The Discovery department doesn’t confine itself to London, but has spread its wings across the channel, and so this week as well as the concerts, rehearsals and pool lounging, a group of players has been coaching the youth orchestra which continues next week, as well as masterclasses and lessons. I was giving a young lady from Aix a lesson, and I must admit I was a little apprehensive as teaching is tricky, especially in French. As soon as I arrived though I realised all was well. The young lady was in fact a 20 year old flute student who is in her 2nd year in Basel – and spoke English more fluently than I. So we spent two hours in air conditioned comfort going through orchestral repertoire. Once she realised I wasn’t one of those terrifying tartar teachers, she relaxed and we both had quite a laugh. She wanted help playing L’apres midi as she couldn’t manage it in one breath, a common complaint. She played it to me and it was obvious why she couldn’t.

I clicked my fingers as she played and as soon as she reached the longer notes in bar three she virtually halved the tempo making the long phrase almost half as long again – hence the breath problem. She looked at me and smiled. Then she repeated it in the correct tempo and, voila, she could could play the whole phrase in one breath. She brought her flute down and looked at me

“Oh Mr Davies, thank you so much, it is amazing!”
“Yes it is amazing, you play what Debussy asks and it’s all good. I don’t think I can really take credit for that!”

But she seemed pleased that I had discovered the secret to the piece. Everyone was happy. It’s funny because my old teacher used to say that you can only teach up to a point and then you reach the stuff that some can do and some can’t. Call it musicality, call it intuition or call it magic if you must, but some people have got it and some haven’t and nobody can explain why, not even Mr Higgs or Mr Boson. The advantage we have in the music world is that that collider thing they are using to search for their God particle, well, they are looking for something that may explain a few things that they think is there. The musical magic is there for all to hear and yet we don’t know where to look for it, centuries ago it was in your liver, then your heart, or maybe it’s in your brain – I don’t know and I don’t care because this god particle is something that we all hear. 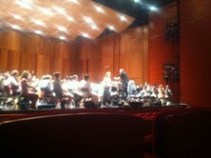 In the show last night, rather than stay in the green room for the pieces I wasn’t in, I stood in the wings. It’s not something I do very often, but I sat through the rehearsal in the stalls as Renée Fleming sang Ravel’s Shéhérazade and I knew that it would be something special in the final show. I stood in the darkness of the flats with my flute and picc (I was in the Stravinsky immediately afterwards) and watched her stand with Valery just before striding out onto the stage in her beautiful dress. At this point in the show she had already sung Dutilleux songs which are so evocative, and the Ravel is no different. It is so languorous it sounds like Ravel had been wandering around Aix and had a long sun-soaked lunch before returning to his house and penning this gem. As the oboe melody began I stood transfixed at the side as the voice wound its way around the French text. She really is a fabulous singer, but what pushes this performance to even greater heights is the corporate and individual brilliance of the orchestra. The hushed envelopment of the string section of the LSO is breathtaking, I have never experienced a sound like it in any other orchestra I have worked with; it is the ultimate in immense power with a delicate touch.

Then of course there are my colleagues in the woodwind section winding their sinuous melodies around the singer. But for me the most wonderful moment is the soft opening of enchanted flute movement. You would probably expect that because I am a flute player myself, but you’d be wrong, I’m not particularly drawn to the sound of the flute, I tend to avoid gatherings of more than a section’s worth – don’t misunderstand me, I love my instrument and its possibilities, it’s just that – how can I put this delicately – there are an awful lot of flute players around, but very few imaginative musicians. It goes back to my teacher – you can teach the mechanics, you can make suggestions about colour, timbre and phrasing. but ultimately it is down to the players imagination – the bits you can’t teach. When Adam Walker, my other half in the professional sense, unfurled his opening phrase in the song, I had to check that it hadn’t been re-orchestrated as the sound isn’t “default flute”, it is otherworldly and quite astonishing, great musicianship at its best and he’s still near the beginning of his career! What you will hear if you are at the Barbican this evening is the bits that you can’t teach, the undiscoverable, the Higgs Boson of the music business. I was reminded as Valery received huge applause, quite rightly after the performance in which he had moulded and shaped the orchestra to his every whim in Petrouska, that the reason he is able to do that is because of people like Adam, and the hushed brilliance of the strings and the control and nerve of the ensemble as a whole. Sitting down the line occasionally joining in with the stellar piccolo playing of Sharon is the time I notice just how good my colleagues are. All of them. I sat through the encore, which I’m not in, and just grinned. Sometimes, just sometimes, the sacrifice is worth it.

Although we aren’t touring until August, when I’ll be back, we haven’t finished – with a couple more concerts with Marsalis, Sawhney and Rattle, which does sound like a law firm, and also a secret project. You all probably know what it is, but if I told you now, I’d have to kill you. Looking at the stats for the blog today, that would just take too long, so I’ll remain tight lipped.

Enjoy the show tonight if you’re coming. Have a great summer and see you next season for another round of tour blog. For those readers who have followed the blog for a few years, today I’m celebrating my daughter’s birthday and also my three year all clear.

The London Symphony Orchestra is one of the world's top orchestras. Our home is at the Barbican Centre in the City of London where we play over 80 concerts every year, but we also spend quite a bit of time out on the road, touring all over the world. Recently we have toured to Germany, France, Russia, New York, Japan, Holland, Hungary, Austria, Belgium, Italy, Switzerland and Lithuania; and coming up this year are China, Taiwan, Malaysia, Japan, Hong Kong, Spain, Portugal, Florida, Romania and a return visit to New York, where we are resident at the Lincoln Center.
View all posts by LSO →
This entry was posted in Aix-en-Provence Festival July 2012, Gareth Davies and tagged Adam Walker, aix, classical music, concert, flute, Gareth Davies, Gergiev, Higgs Boson, london symphony orchestra, LSO, renee fleming, Sharon Williams, tour, Valery Gergiev. Bookmark the permalink.