Back in the real world, it’s back to school for my kids and thousands of others as the long, languorous days of the summer holiday fade away. The collective tension of thousands of shoe shop workers around the country increases to unbearable limits as a stream of parents and children are measured for the start of the new term. It’s always a breath-holding moment, much like watching the balls drop in the lottery, as you wait to see if the feet of your brood have increased in size since the end of the summer term. If they haven’t then maybe you can make do with the old pair until half term; if the numbers are bigger then it’s new school shoes, trainers, football boots and for the private schools, rugby and lacrosse boots. Having three children that is a huge expense and all of them recognise the look that flashes between me and my wife that says in an instant “are you sure your feet have grown or is this purchase driven by fashion choices?” But sometimes, you have to admit defeat – the shoe just doesn’t fit.

Cinderella and her glass slipper issue are a lifetime away, we have just left Merano, a beautiful spa town in the mountains about two hours from Bolzano to play Mahler and Brahms. The well to do are drinking champagne outside in the balmy air before the concert, the hall is bathed in pink lights and the locals speak a curious mix of Italian and German. We are unclear as to exactly who should speak to the audience this time.

LSO van outside the theatre in Merano

Both the outside and inside of the hall are exceptionally beautiful, but already a problem is evident as during the rehearsal, half the auditorium is taken up with cases and instrument trunks – there is virtually no space backstage. That isn’t all; although the hall is a traditional shoe box shape, a space which in my experience guarantees a good sound for the orchestra, the shoe box it was modelled on was that of my 8 year old daughter. At least, for the shoes she had last term anyway. When you sit on the stage, the balcony at the side is almost hanging over the woodwinds and the basses are underneath it wallowing around in semi darkness. With the piano in place for the Brahms, it becomes clear by the eager look on the faces of some of the back desk players that an early finish is on the cards. MTT looks forlornly around and then reads out the winning numbers which dictate the size of the string section.There is silence. There is tension.

“Ok, I’m afraid for Brahms we are going to have…”

A short silence is followed by the unmistakeable sound of somebody silently, but by mistake stage whispering, “YES!” A scrape of chairs is followed by a small exodus before anyone can change their minds. The remaining players move their chairs to fill the space and there seems to be no more room than before. 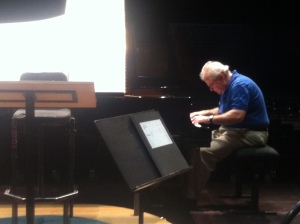 Manny warming up for another Brahms concerto

Manny Ax walks to the front of the stage after listening and says that basically it is all too loud.  Trouble is, it’s hard to play this stuff quietly, but with a little more pruning of desks and muzzling of brass we play Mahler 1 at less volume but with maximum energy. I looked up at the balcony in one of my many movements off in the symphony and people were smiling and not in any obvious pain. Funny that Mahler, never one to shy away from excessive forces, had to be cut back. Sometimes the shoe doesn’t fit and occasionally even the shoe box cannot contain the LSO.

This morning we left after a welcome lie in on this hectic trip. After 5 days and 5 concerts with no end in sight, it was welcome relief waking without an alarm call, particularly as at the end of our coach trip was Verona and concert number 6. We have a rehearsal in an hour, where for the first time in a while, we will not be playing something from Romeo and Juliet as an encore. That, as Shakespeare would say, is irony. Verona, if you haven’t been, is a gorgeous place, stunning amphitheatre and old streets; yet again Lorenzo found us a lovely place for lunch, although I fear now that our secret is out and other players are following him too – they did very good business.

A city full of balconies decked in flowers with women standing leaning out over the throngs of tourists beneath, all dreaming of their Romeo. I can’t help wondering though who decided that they would pick one balcony and say that it was the one from Romeo and Juliet, what with Shakespeare being exclusively absent from the non-fiction section of the bestseller lists.  Of course, we go and have a look at the merchandise available, R+J cigarette lighters, bandanas, miniature swords etc etc etc. But soft, what light through yonder window breaks? Yep, it’s a Romeo and Juliet Lava lamp. The balcony itself…as it were…is lovely and old and from the right period, and when I look has 1 man and 3 women all reciting the same speech in several languages for their video cameras beneath.

I can’t stop though as before the rehearsal I need to phone my Juliet back home and see how much the shoes cost. Later we play more Brahms and Mahler, the music of two gentlemen in Verona which seems more appropriate in a city defined by star crossed lovers. The bard said that music is the food of love and of course we will be playing on for more than a week. But at this stage of the tour, in this most romantic of cities, having been away from home for quite a while now, I wish my Juliet was in Verona to hear it.

The London Symphony Orchestra is one of the world's top orchestras. Our home is at the Barbican Centre in the City of London where we play over 80 concerts every year, but we also spend quite a bit of time out on the road, touring all over the world. Recently we have toured to Germany, France, Russia, New York, Japan, Holland, Hungary, Austria, Belgium, Italy, Switzerland and Lithuania; and coming up this year are China, Taiwan, Malaysia, Japan, Hong Kong, Spain, Portugal, Florida, Romania and a return visit to New York, where we are resident at the Lincoln Center.
View all posts by LSO →
This entry was posted in European festivals September 2012, Gareth Davies and tagged Gareth Davies, london symphony orchestra, LSO, Merano, Romeo & Juliet, symphony, tour, Verona, William Shakespeare. Bookmark the permalink.